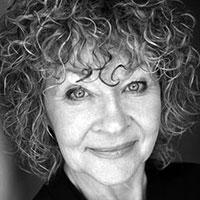 Carol spent two very happy years early in her career at the National Theatre in Schwyk in the Second World War, as Mimi in Guys and Dolls, Mrs Coaxer in The Beggars Opera and U/S and played Young Jean in Jean Seberg – whilst there she also staged three plays.

She was Anytime Annie in the original London run of 42nd Street – a role she played for five years at Theatre Royal Drury Lane. In the West End she was also in the original productions of Chicago and Hello Dolly and more recently Guys and Dolls, The Goodbye Girl and Thoroughly Modern Millie – you could say the West End is Carol’s spiritual home.

However, Carol’s regional theatre work is also top level and highlights have included playing the original Mrs Cunningham in the world premiere of Happy Days the Musical (she met the real Fonz) and principal roles in Sondheim musicals Company and Follies.

On television Carol has shown her natural acting ability and presence in The Bill, The Trip, Sherlock Holmes’ Smarter Brother (dir: Gene Wilder) and in Ken Russell movies The Boyfriend and Valentino. In 2013 she filmed the role of a tap-dancing tea lady in Muppets Most Wanted Disney movie.

She played various characters in Ladies of the Music Hall with Barbara Windsor (BBC radio 2) and has appeared in numerous television specials, commercials, corporate training videos and Royal Command Performances.