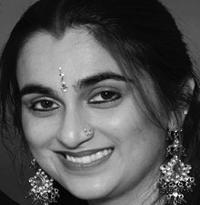 Nina Rajarani has served on the Faculty Committee and has been the Faculty Secretary since its inception in 1999. She is also a committee member. She was integrally involved in the writing of the original Bharatanatyam outline syllabus and its specifications.  She is also amongst the first batch of Bharatanatyam examiners appointed by the ISTD in 2001.

Nina trained at London’s Bharatiya Vidya Bhavan under her guru Prakash Yadagudde during which time she also trained with Chitra Visweswaran (of Chennai, India), during her visits to London. Since 1988 she has received training regularly in Chennai under Shanta and VP Dhananjayan. Nina’s dance style today is unique in its assimilation of the best qualities from each of the different traditions followed by the gurus with whom she has trained.

Nina has also received Karnatic music vocal training under Sivasakti Sivanesan at Bharatiya Vidya Bhavan in London, and under Karpagam Balasubramanian in Chennai.

Nina has earned herself an admirable reputation as a committed teacher with over twenty years of teaching experience.  Her school SRISHTI – Nina Rajarani Dance School has been established at the Harrow Arts Centre, Middlesex, England since 1991, and her students pride themselves upon the high standard of dancing they aim to achieve.

As a performer as well as with her company SRISHTI – Nina Rajarani Dance Creations, Nina has toured extensively within the UK, in several European countries, in India, Singapore, Malaysia, Australia, Canada and the US.

In September 2006, Nina won the Place Prize, Europe’s largest choreographic competition sponsored by Bloomberg. Her piece QUICK! won the competition with rave comments from the judges and press. QUICK! has continued to tour both nationally and internationally with performance requests still forthcoming.

Over the years, Nina and her husband, vocalist and composer Yadavan, have together created several outstanding new dance works, providing a strong artistic team for the company, performing extensively and delighting audiences worldwide.

Nina Rajarani was awarded an MBE (Member of the British Empire) in the Queen’s 2009 Birthday Honours, in recognition of her services to South Asian dance.  The award, which recognises many years’ work developing and raising the profile of South Asian dance, was presented at an official ceremony at Buckingham Palace in December 2009.  The Queen’s Birthday Honours are awarded each year, paying tribute to outstanding achievement and service across the community.