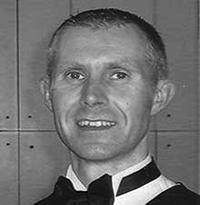 Robert began dancing at an early age at the Wilson School of Dancing in Debyshire. He worked his way through the medal test system in Ballroom, Latin & Classical Sequence and competed as a Juvenile and Junior before deciding to train as a professional in 1991.

It was at this time that he met Louise, who later became his wife, and began teaching at her family dance school. They began to enter the Inventive Dance competitions and won with their first attempt at the British Dance Council event in 1995. The dance was “Countess Waltz”, a Classical Waltz, which later went on to become a popular championship dance. Since then they have won at every major Inventive Dance competition including Blackpool which they have won 8 times. Another of their prize winning Classical Sequence “Washington Two Step” has also been accepted onto the Championship list.

Robert is in much demand as an adjudicator, including for the prestigious British Junior Championships and British Sequence Championships in Blackpool along with medallist and social competitions for all the ballrooms styles. He is frequently invited to lecture at the congresses and workshops of all the main dance teaching organisations and, together with Louise, has been presented with the “Classique de Dance” and “North East Dance” Awards.

Robert is now a full time dance teacher and co-principal of the busy Duesbury Aldred Dance Centre, an Imperial Society of Teachers of Dancing Approved Dance Centre in Nottingham. The centre teaches all of the ballrooms styles and is involved in training competitors, medallists and social dancers of all ages. Robert is a Fellow of the ISTD, NATD and IDTA. In 2006 he was delighted to be invited to join the Sequence Faculty and through this he enjoys the challenge of promoting the benefits of dance in general and Classical Sequence in particular.