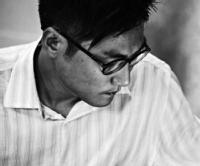 Sho was actively involved in the performing arts in Japan as a child, performing in various children's television and film productions as well as on stage with 'Les Miserables' directed by John Caird and 'Waiting for Godot' directed by the late Yukio Ninagawa.

He then moved to UK in 1995 and graduated from London School of Economics and Political Science in 2005 with a degree in Philosophy and Social Psychology. His studies gave him a theoretical understanding of how discrimination and segregation come about in social settings. After graduation, Sho worked at Arts Council England, South East and joined Stopgap Dance Company in 2008 to manage touring, outreach and dance development projects.

Sho began producing Stopgap’s outdoor productions in 2009 with Tracking and built its profile in the outdoor arts sector. His endeavours culminated with a Cultural Olympiad tour of SPUN Productions in 2012. After successfully complating SPUN, Sho joined the company’s senior management as the company’s full-time producer.

Sho is a trustee of ISTD and a member of the Regional Council for Arts Council England.